Hans Christian Andersens The Little Mermaid (, Anderusen Dowa Ningyo Hime, lit. "Andersens Fairy Tales: Princess Mermaid") is a Japanese anime film based on Hans Christian Andersens eponymous fairy tale, released in 1975 by Toei Animation. Unlike the later Walt Disney Pictures animated film adaptation released 14 years later, this film is closer to Andersens original story, notably in its preservation of the original tragic ending. The protagonists are the youngest daughter of the royal Merman family, Marina, and her best friend Fritz, an Atlantic dolphin calf. In Japan, this film was shown in the Toei Manga Matsuri (Toei Cartoon Festival) in 1975. The film was later released in the United States, dubbed into English by G. G. Communications, Inc. and Prima Film, Inc., on September 8, 1979. 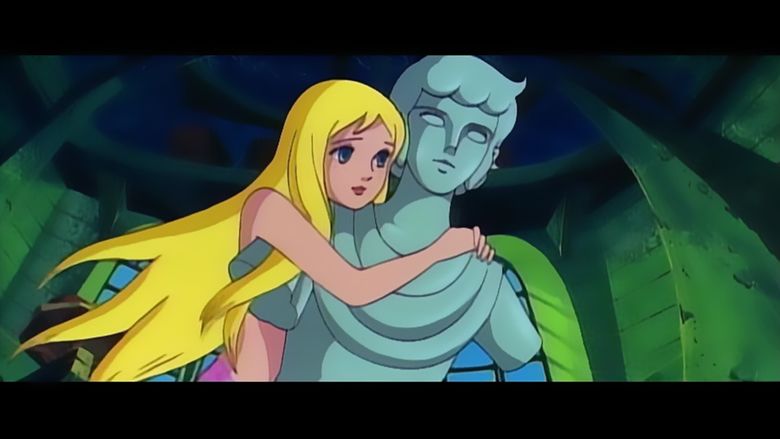 It was initially available on region 1 (USA and Canada) DVD, released by UAV Corporation under the name "The Little Mermaid: Based on Hans Christian Andersens Classic Tale". The cover art is significantly different from the cover art from the original US VHS release of the film (released by Starmaker under the title "Hans Christian Andersens The Little Mermaid") or the film animation style. However, multiple reviewers on Amazon.com state that the actual film on the DVD is the same as the Starmaker release (albeit somewhat censored). The customer images aside from the cover art also depict images from the original 1975 Toei film. The UAV version is not to be confused with the GoodTimes Entertainment/Golden Films version. The film is now licensed by Discotek Media.

The story of a beautiful mermaid who gave up a kingdom for her beloved prince. 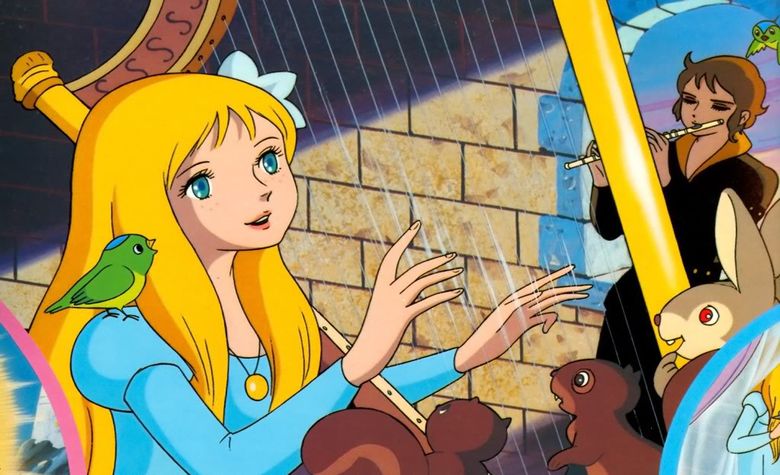 The movie opens in live action Denmark. From there, a narrator explains to the audience how Denmark is a popular tourist destination. He also states that many storytellers were born in Denmark, and the most famous one is Hans Christian Andersen. After explaining how this man wrote beautiful stories, the narrator finishes the explanations by mentioning that Andersens most famous story, "The Little Mermaid," originated in Denmark. After a brief shot of a live action ocean and the opening title card (with a mermaid song in the background), the scene dissolves to 2D hand-drawn anime. 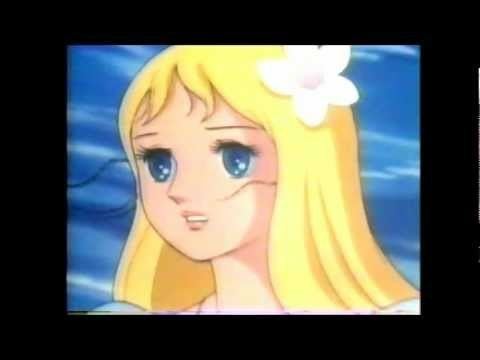 Marina, the youngest and most beautiful mermaid in the royal family, is playing with her bottlenose dolphin calf friend, Fritz, then when is about to enter the palace, when suddenly the Sea Witch causes a storm (which wrecks a ship up the surface). Fritz helps to the palace, and says good-bye. Her six older sisters scold her for being late, then the oldest reminds Marina that their grandmother wont give her the pearl hair-pin if she doesnt stop playing with Fritz, which a devastated Marina begs them not to tell, and they chuckle. Their father and grandmother call, and tell them they should be in bed, since the storm is not safe, then they bid them good-night. The next morning, Marinas sisters are about to go to the surface. Marina, curious about the human world, always tries to go up to the surface with them, but is forbidden because she has not come of age yet. One day, while exploring inside the sunken ship with Fritz (which the Sea Witch destroyed the other day), she discovers a statue of a human boy and starts to daydream. She decides she is ready to see the world above and, ignoring her familys wishes, she and Fritz sneak away to the surface, with the help from Fritzs whale uncle, Duke (who stole a pearl off the roof of the Merman palace and gave it to his mate as a present years earlier). Moments after emerging from the depths, she sees a handsome prince on a ship, the very same boy from the statue. Suddenly, the Sea Witch creates a storm, throwing him into the sea. Marina saves her handsome prince and swims with him to the seashore. She must leave him on the shore when the sun rises and a woman and her friends arrive. Marina falls deeply in love and wants desperately to become a human. Seeking help from the sea witch, Marina gives up her life as mermaid and her voice to gain legs. She is informed that if the prince marries another woman, she will die and turn into sea foam the very morning after his wedding. Despite the hazards, she is willing to risk all for pure and genuine romance. The sea witch takes Marinas voice in exchange for legs. Tearfully bidding farewell to her family and to Fritz, she goes on to the surface. Marina drinks the potion, and is transformed into a human (wearing nothing but her pearl hair-pin). The following morning, she is discovered by the prince, with some servants helping her to the palace, much to the jealousy of his nasty cat, Jemmy. 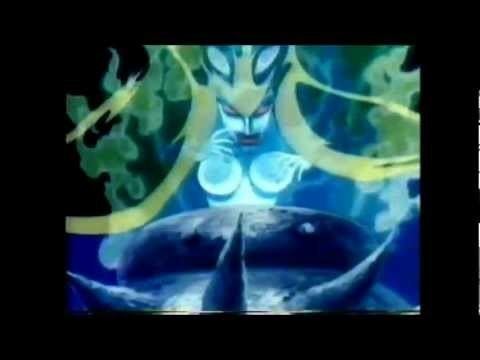 Marina lives with the prince for a month, in that time their bond of friendship grows stronger and soon blossoms into genuine and close romance. The Prince calls her "Princess Mermaid" because she came to him from the sea and cannot tell him her own name as she is now mute. One day, as she is playing the harp (she took a liking to playing it), she hears a familiar dolphin call, and she runs down the stairs (and accidentally knocks over Jemmys bowl of milk, which got in her face, and the cat hisses at her). Marina then spots four boys throwing rocks at Fritz, and she defends Fritz as the Prince takes the boys away and scolds them for their cruelty. Fritz then informs Marina that if she needs him, shell need to raise her pearl hair-pin up and hell come. The Prince, amazed by Marinas compassion for animals, takes Marina horse-back riding the next morning. While riding, Jemmy, watching them in the woods, jumps on Marinas horse, pinning her claws on it and the horse bucks her off. Marina is surrounded and chased by wolves, and the Prince races on his horse to rescue her. Marina, without Fritz to protect her, tries to act brave, then luckily the Prince arrives and kills the wolves with his bow and arrows, as Jemmy watches in frustration, vowing to get rid of Marina once and for all. The Prince tells her how his parents want him marry a princess from another kingdom. However, the only girl he wants to marry is the one who saved his life. Unfortunately, the prince does not know Marina is the one who saved him. He mistakenly believes it to be the raven-haired girl who discovered him on the beach after Marina had rescued him. Since he cannot find her, he wishes to marry Marina. However, they were secretly watched by Jemmy and her sidekick, Lord Chamberlain. Jemmy decides that if she couldnt have her master, then no else would. She arrives at the princes palace, and tells the King and the Queen that the prince is against the marriage, and the Queen suspects that Marina bewitched him. When the ship arrives (hiding the fact that the prince will meet the Princess of Finland by informing him that the Queen is sick), the Prince tells Marina to help pray for his mother, and the King and Queen arrive. The Princes father falsely orders the guards to arrest Marina for treason as the Prince unsuccessfully tries to defend her. The next morning, the Prince is forced to meet the princess his parents want him to marry, he discovers that the foreign princess is the raven-haired girl. Filled with joy, he arranges to marry her immediately, breaking Marinas heart.

The night before she is to die, Marian raises her pearl hair-pin high in order to bid one last good-bye to Fritz. When he finds out shes going to die, the dolphin breaks down in front of her, and swims off, vowing to find a way to save his friends life. Many hours later, her sisters visit her. They present a knife they have bought by cutting off their beautiful hair and giving it to the sea witch. Her sisters tell her that if she stabs the prince through the heart, she will turn into a mermaid again and can go back to her old life in the sea. Marina accepts the knife. However, as she goes to stab the prince, she finds that she cannot bring herself to kill him as she loves him so. She goes to the stern of the ship they are on, having decided that the princes happiness is her happiness, and that as sea foam she can always be around him. As she throws the magic knife into the sea, it shines a blood red, which wakes the prince. He runs onto the deck and sees Marina, about to jump off of the ship. He calls her name, and runs to her, but she jumps off the ship. As he calls her name a final time, he looks to see that she has left behind her pearl hairpin and a scale from her tail. He grabs them both, and looks confused into the sea. As the sun rises, Marinas body slowly turns to foam and ascends into the sky. The prince remembers now that she was, in fact, the one who had saved him as he grieves over her death. Marinas spirit goes on to Heaven for her self-sacrifice, as Fritz calls out her name.

The narrator then speaks again, explaining to the audience that the mermaids soul went to Heaven and the scene then dissolves back to live action Denmark. As the movies final shot shows us The Little Mermaid statue, the narrator finishes the movie by assuring us that the little mermaid, with her courage, bravery, and story, will continue to guide mankind now and forever more.

Princess Marina (, Mariina Hime)
Sixteen years old. Princess of the undersea kingdom and the youngest of six daughters. She is a blonde, sweet and beautiful mermaid and is known for having the most beautiful voice in the kingdom. She is curious about the world and likes collecting items that come from the surface.
Fritz (, Furittsu)
A blue Atlantic dolphin calf, and Marinas best friend. His curiosity is great, but not nearly as great as Marinas. In fact, Fritz loves Marina. However, Marina never knows his feelings. He misses Marina terribly and worries about her constantly after she leaves the sea.
Prince Fjord (, Fiyorudo Ouji)
He is brave and well-trained in the military arts. Fjord dislikes the idea of an arranged marriage. He has always wanted to marry the girl who rescued him. Fjord does not remember that Marina is the one who rescued him, until the end of the film.
Sea Witch (, Witch)
Unlike other versions of the story, the sea witch is not evil. She is shrewd, but has no interest in harming anyone. She did however sink two ships. She is a gigantic devil ray. Her special favorite is lifeblood. She is willing to accept Marinas voice as payment for the enchantment to turn Marina into a human.
Princess Cecilia (, Suomi no Hime)
The black raven-haired princess of the Kingdom of Suomi. She tended to Prince Fjord after Marina rescued him and had to leave him on the beach. Fjord had no memory of being rescued by Marina, and Cecilia is the first person Fjord saw when he woke up. Her name is uncertain in Japanese.

"The One Ive Waited For" (, Matteita Hito) Marinas Song in the English version.

Sung by Kumiko Osugi and People, Lyrics by Tokiko Iwatani, Music and Arrangement by Takekuni Hirayoshi.

On the newer VHS and DVD releases, all scenes that show the little mermaids bare breasts are cut.

The Japanese version can be viewed on several media websites including Yahoo! Japan, but IP addresses not based in Japan are blocked from viewing it.