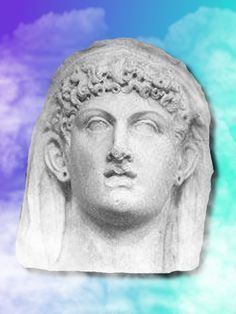 In 103, Cleopatra III decided to establish an alliance with Antiochus VIII of Seleucid Syria; Cleopatra Selene was sent as his bride and stayed with him until his assassination in 96 BC. The now widowed queen decided to marry her previous husband's brother, Antiochus IX, but she lost her new husband in 95 BC. She then married her stepson, Antiochus IX's heir, Antiochus X; this was Cleopatra Selene's last marriage. Antiochus X disappeared from the records and is presumed to have died in 92 BC; Cleopatra Selene hid somewhere in Syria with her children until 83 BC when the Seleucid thrones in Antioch, ruled by Philip I, and Damascus, ruled by Antiochus XII, became vacant.

Cleopatra Selene had many children by several husbands. In 83 BC, she declared Antiochus XIII, her son by Antiochus X, king, and seems to have declared herself co-ruler. However, the people of both Antioch and Damascus, exhausted by the Seleucids' civil wars, invited foreign monarchs to rule them: Tigranes II of Armenia took Antioch, while Aretas III of Nabataea took Damascus. Cleopatra Selene controlled several coastal towns until 69 BC, when she was besieged by Tigranes in Ptolemais; the Armenian king captured the queen and later executed her.

Cleopatra Selene was born between 135 and 130 BC to Ptolemy VIII and his wife Cleopatra III. Ancient writers, such as Cicero and Appian, mention that the queen's name is Selene, and Strabo clarified that she was surnamed "Cleopatra". Coins struck in her name record her as Cleopatra Selene. Selene was the name of the Greek moon goddess and it is connected to the word selas (σέλας), meaning "light". "Cleopatra" was a Ptolemaic dynastic name; it means "famous in her father" or "renowned in her ancestry". As a queen of Syria, she was the second to rule with the name Cleopatra, hence, she is termed Cleopatra II Selene to differentiate her from her predecessor and aunt Cleopatra I Thea, who was also the mother of Cleopatra Selene's husbands, Antiochus VIII and Antiochus IX. Grace Macurdy numbered Cleopatra Selene as "Cleopatra V" within the Ptolemaic dynasty and many historians have used this convention.

Sibling marriage was known in ancient Egypt, and although it was not a general practice, it was acceptable for the Egyptians; the Ptolemaics practiced it perhaps to consolidate the dynasty. In 116 BC, shortly after Ptolemy IX's ascension to the throne, his mother Cleopatra III forced him to divorce her daughter Cleopatra IV; the 2nd-century historian Justin implied that this was Cleopatra III's condition to accept Ptolemy as co-ruler. Cleopatra Selene, favored by her mother, was chosen as the new queen consort in 115 BC. In 107 BC, the relation between Ptolemy IX and his mother deteriorated; Cleopatra III forced him out of Egypt and he left his wife and children behind.

The same year, 107 BC, Cleopatra Selene was probably married off to the new king, her younger brother, Ptolemy X. In 103 BC, Ptolemy IX was fighting in Judea; this caused Cleopatra III to worry and she sent troops against her son. The queen mother feared an alliance against her between Ptolemy IX and his friend Antiochus IX of Syria, who was fighting a civil war with his brother Antiochus VIII. It seems that Ptolemy X was horrified by his mother's ruthlessness and ran away as can be read in the work of Justin. To prevent an alliance between her son and Antiochus IX, Cleopatra III decided to marry Cleopatra Selene to Antiochus VIII and bring him to her side. Cleopatra Selene was divorced from Ptolemy X and sent to Syria; this seems to have happened only after Ptolemy X deserted the queen mother.

The queen held out in the capital for a while before marrying Antiochus IX. The manner in which Antiochus IX took control of Antioch and his new wife in 95 BC is not clear; he could have taken the city by force or it could be that Cleopatra Selene herself opened the gates for him. In the view of Auguste Bouché-Leclercq, Cleopatra Selene had little reason to trust the five children of her previous husband; the queen needed an ally who would help her control the capital while Antiochus IX needed a wife and Cleopatra Selene's influence over the city's garrison and her late husband's officials. It is unlikely that this marriage was received well by Antiochus VIII's sons. The first of them to act was Seleucus VI who was established in Cilicia. Antiochus IX marched against his nephew but was defeated and killed. Soon afterwards, Seleucus entered the capital. Cleopatra Selene probably fled before the new king's arrival. Alternatively, she might have been sent to Arados by Antiochus IX for protection before he marched against Seleucus VI.

In 95/94 BC, Antiochus X, the son of Antiochus IX, proclaimed himself king in Arados, and married his step-mother Cleopatra Selene. Seleucus VI was pushed out of Antioch in 94 BC. The marriage was scandalous. Appian wrote an anecdote concerning Antiochus X' epithet, "Eusebes" (pious): it was given to him by the Syrians to mock his show of loyalty to his father by bedding his widow. The rationale for the marriage might have been more pragmatic: Antiochus X sought to be king, but had little resources and needed a queen. Cleopatra Selene was in her forties and could not simply marry a foreign king. Furthermore, the Seleucid dynasty had a precedent of a son marrying his stepmother, as Antiochus I married his stepmother Stratonice, and this might have made it easier for Cleopatra Selene. The last evidence for Antiochus X' reign is dated to 92 BC, and he is generally assumed to have died at around this date, but ancient sources contain contradictory accounts and dates, with modern scholarship proposing the date of 88 BC for Antiochus' demise.

Cleopatra Selene's location during the reign of Antiochus X' successors in Antioch, such as Philip I (one of Antiochus VIII's sons), is unknown. She evidently hid with her children somewhere in Syria, and possibly fled to Coele-Syria or Cilicia. Antiochus XII, another son of Antiochus VIII who was ruling in Damascus, died in 83 BC and it seems that Philip followed the same year. Cleopatra Selene then pushed her children to claim Antiochus X rights on the vacant throne, with herself as the regent, based on the evidence of jugate coins which depict her alongside her ruling son. Three of Cleopatra Selene's jugate coins have been found, and they depict her son Antiochus XIII in the background and herself in the foreground, in the style of a queen regnant, where the queen's name is written before that of the king's. The children were probably in Cilicia or somewhere else in Asia Minor for protection, which would explain Antiochus XIII's nickname, "Asiaticus".

Cleopatra Selene's claims of authority were not generally accepted by the Syrians, who were frustrated by the Seleucids' constant civil wars. In 83 BC, the people of Antioch invited Tigranes II of Armenia to rule Syria, while the people of Damascus invited Aretas III, King of the Nabataeans. Tigranes never controlled the entire country and took Damascus only in 72 BC. When she declared her son king, Cleopatra Selene controlled lands in Cilicia or Phoenicia or both. Alfred Raymond Bellinger suggested that she was in control of several coastal Syrian cities from a base in Cilicia; she certainly controlled Ptolemais and probably Seleucia Pieria. the 1st-century historian Josephus wrote of "Selene...who ruled in Syria", indicating her continued influence despite her never controlling the capital Antioch.

Based on her coins, Oliver D. Hoover suggested that Selene operated from Damascus; those coins used a broken-bar Alpha, cursive Epsilon and squared Sigma. This typography appeared in the Damascene coins of Demetrius III and Antiochus XII and is otherwise rare in the Hellenistic world. If her currency was minted in Damascus, then it dates to the period between 83 BC and Tigranes' occupation of the city in 72/71 BC; Damascus' history is obscure in this period and Hoover suggested that Aretas III's rule in the city did not last long before Cleopatra Selene took control.

In 75 BC, Cleopatra Selene sent Antiochus XIII and his brother to Rome, where they stayed until 73 BC then returned to Syria; they claimed the throne of Egypt based on their mother's birth right. To impress the Roman Senate, the queen endowed her children with enough assets, which included a jewelled candelabrum that was dedicated to the temple of Jupiter Capitolinus. The Senate refused to hear their petition for the Egyptian throne, but, according to Cicero, their de jure right to the Syrian throne which they inherited from their ancestors was already acknowledged.

In 69 BC, Tigranes besieged Cleopatra Selene in Ptolemais; the city fell according to Josephus, but Tigranes had to move north fast as the Romans started attacking Armenia. According to Strabo, Tigranes imprisoned the queen in Seleucia and later had her killed. John D. Grainger explained Tigranes' action with Cleopatra Selene's political importance; she was a winning card in the hands of her husbands, and Tigranes sought to deny other ambitious men from acquiring influence through her. However, tracking her life allows a more balanced evaluation where Cleopatra Selene started as a pawn in political schemes, and evolved into a player, who decided her actions effectively based on her own benefit.

Cleopatra Selene possibly bore Ptolemy X his son Ptolemy XI but her maternity can not be confirmed; Cleopatra IV might have been the mother instead, but this is also an assumption and the identity of Ptolemy XI's mother remains a mystery.

Identifying Antiochus X and Cleopatra Selene's children is problematic; Cicero wrote that the queen had two sons, one of them named Antiochus. More children, perhaps a daughter, might have resulted from the marriage, but it can not be confirmed; according to Plutarch, Tigranes II "put to death the successors of Seleucus, and carry off their wives and daughters into captivity". Thus, it is possible that Cleopatra Selene had a daughter captured by Tigranes.