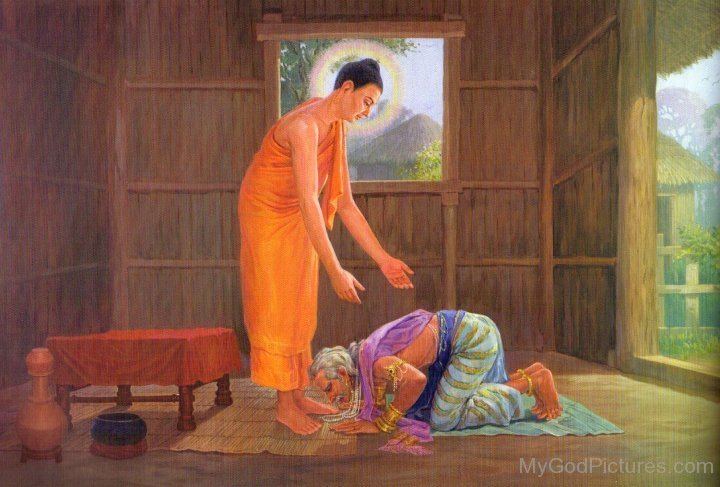 He is also known for his cultural achievements and was a great friend and protector of the Buddha. Bimbisara built the city of Rajgir, famous in Buddhist writings. He was succeeded on the throne by his son Ajatashatru. 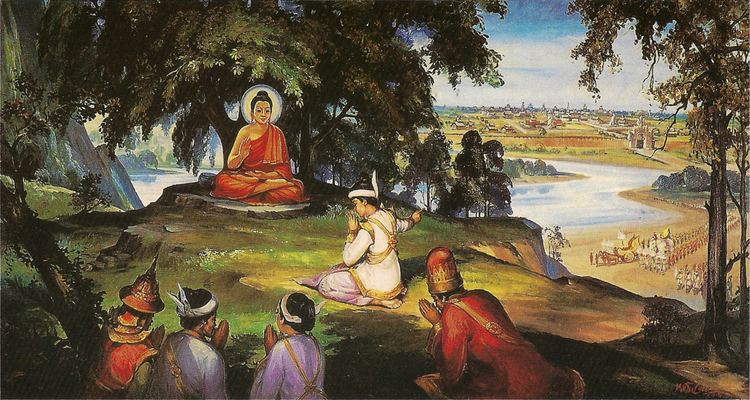 Place where king bimbisara made his first offering to lord buddha

Bimbisara's first capital was at Girivraja (identified with Rajagriha). He led a military campaign against Anga, perhaps to avenge his father's earlier defeat at the hands of its king, Brahmadatta. The campaign was successful, Anga was annexed, and prince Kunika (Ajatashatru) was appointed governor at Champa.

Bimbisara used marriage alliances to strengthen his position. His first wife was Kosala Devi, the daughter of Mahā Kosala the king of Kosala, and a sister of Prasenjit. His bride brought him Kashi, which was then a mere village, as dowry. This marriage also ended the hostility between Magadha and Kosala and gave him a free hand in dealing with the other states. His second wife, Chellana, was a Lichchhavi princess from Vaishali and daughter of King Chetaka. As per Indologist Hermann Jacobi, Vardhaman Mahavira's mother Trishala was sister of Chetaka. His third wife, Kshema, was a daughter of the chief of the Madra clan of Punjab. These marriage alliances paved the way for the expansion of Magadha Empire both westward and northward.

Although Bimbisara let the women in his palace visit Buddha in his monastery in the evenings; the women wanted a hair and nail stupa they could use to venerate the Buddha any time. After Bimbisara spoke with Buddha who complied with their request.

According to the tradition, Bimbisara was imprisoned by his son Ajatashatru to ascend the throne of the kingdom of Magadha. Ajatashatru later ordered his father's release after the birth of his first child, but by then it was too late and Bimbisara had already died. This was reported to have taken place around 491 BC.

King Bimbisara is referred to as King Shrenika of Rajgir in Jain literature who became a devotee of Jainism impressed by the calmness of Yamadhar (a Jain Muni). He frequently visited Samavasarana of Lord Mahavira seeking answers to his queries. He asked about the true version of Ramayana and an illuminating sage (King Prasana).

According to Jain scriptures Bimbsara or King Srenika in Jainism was contemporary of Lord Mahavir. Jain scriptures described King Bimbisara as a disciple of Lord Mahavira who frequently sought his teachings. As per Jain texts, he is referred to as King Shrenika of Rajgriha (being the possessor of a large army). Bimbisara sent Jivaka to Ujjain for medical treatment of King Pradyata, the king of Avanti. He was Baldev in a previous life. Per scriptures, this soul is to become the first Tirthankara of the next cycle..

This is a story from the time of Bhagwan Mahavir. At that time, king Chetak was the ruler of Vaishali and he had a beautiful daughter named Chelna. Once an artist called Bharat painted a picture of Chelna and showed it to king Shrenik (Bimbisar) of Magadh. Charmed by Chelna's beauty, Shrenik fell in love with her. One day Chelna came to the city of Magadh where she saw king Shrenik, and she also fell in love with him. They soon got married.

Queen Chelna was a devoted follower of Jainism, while Shrenik was influenced by the Buddhism. The king was very generous with a big heart but somehow was not happy with his queen's devotion to the Jain monks. He wanted to prove to Chelna that Jain monks were pretenders. He strongly believed that no man could follow the practice of self-restraint and non-violence to that extent, and that the equanimity shown by Jain monks was just superficial. Chelna was greatly disturbed by this.

One day king Shrenik went on a hunting trip where he saw a Jain monk, Yamadhar, engaged in deep meditation. Shrenik let his hunter dogs go after Yamadhar but the monk remained silent. On seeing the calmness and composure of the monk the dogs became quiet. king Shrenik got angry and thought that the monk had played some trick on them. So he started shooting arrows at the monk but they kept on missing him. Becoming more upset, he finally put a dead snake around Yamadhar's neck and came back to his palace.

The king narrated the whole incident to Chelna. The queen felt very sorry and took the king back to Yamadhar's meditation spot. Because of the dead snake, ants, and other insects were crawling all over the monk's body but the monk did not even stir. The couple witnessed the limits of human endurance. The queen gently removed the ants and snake from the monk's body and cleaned his wounds. She applied sandalwood paste. After sometime, Yamadhar opened his eyes and blessed both of them.

The monk did not distinguish between the king who had caused him pain, and the queen who had alleviated his pain. King Shrenik was very impressed, and convinced that Jain monks were truly beyond attachment and aversion. Thus, king Shrenik along with queen Chelna became a devoted member of the order of Bhagawan Mahavir.

According to Buddhist scriptures, King Bimbisara met the Buddha for the first time prior to the Buddha's enlightenment, and later became an important disciple that featured prominently in certain Buddhist suttas. He is recorded to have attained sotapannahood, a degree of enlightenment in Buddhist teachings.

Bimbisara sent Jivaka to Ujjain for medical treatment of Pradyota, the king of Avanti.

He was Baldev in a previous life. Per scriptures, this soul is to become the first tirthankara of the next cycle.