Bikini Atoll is an atoll in the Marshall Islands. The atoll consists of 23 islands totaling 3.4 square miles (8.8 km2) surrounding a deep 229.4-square-mile (594.1 km2) central lagoon at the northern end of the Ralik Chain (approximately 87 kilometres (54 mi) northwest of Ailinginae Atoll and 850 kilometres (530 mi) northwest of Majuro). Within Bikini Atoll, Bikini, Eneu, Nam and Enidrik islands comprise just over 70% of the land area. Bikini and Eneu are the only islands of the atoll that hosted a permanent population. Bikini Island is the northeastern most and largest islet. Before World War II, the atoll was known by its Baltic German name as Escholtz Atoll.

Between 1946 and 1958, 23 nuclear devices were detonated by the United States at seven test sites located on the reef, inside the atoll, in the air, or underwater. They had a combined fission yield of 42.2 Mt. The testing began with the Operation Crossroads series in July 1946. Prior to nuclear testing, the residents initially accepted resettlement voluntarily to Rongerik Atoll, believing they would be able to return home within a short time. Rongerik Atoll could not produce enough food and the islanders starved for lack of food. When they could not return home, they were relocated to Kwajalein Atoll for six months before choosing to live on Kili Island, a small island one-sixth the size of their home island. Some were able to return to the Bikini Island in 1970 until further testing revealed dangerous levels of strontium-90. The islanders have been the beneficiary of several trust funds created by the United States government which as of 2013 covered medical treatment and other costs and paid about $550 annually to each individual.

In 1998, the Bikini Council authorized diving operations as a means to generate income for Bikini islanders currently and upon their eventual return. The tours, limited to fewer than a dozen experienced divers a week, cost more than US$5000 and include detailed histories of the nuclear tests. The dive operations were managed from a shore-based facility until operations were suspended in 2008 when the Marshall Island airline ceased service due to unresolved mechanical issues. They have since been resumed from a live-aboard ship. While the island may be habitable in the near term, virtually all of the islanders alive today have never lived there. As of 2013, about 4880 Bikini people live on Kili and other Marshall Islands, and some have emigrated to the United States. Bikini Island is currently visited by a few scientists and inhabited by 4-6 caretakers.

The atoll and island gained world-wide attention due to nuclear testing, and because of the remaining direct tangible evidence of the nuclear tests, UNESCO named it a World Heritage Site. Building on this attention, in 1946, French engineer Louis Reard named his new swimsuit design the bikini, in hopes that its revealing style would create an "explosive commercial and cultural reaction" similar to the 1946 nuclear explosion at Bikini Atoll. 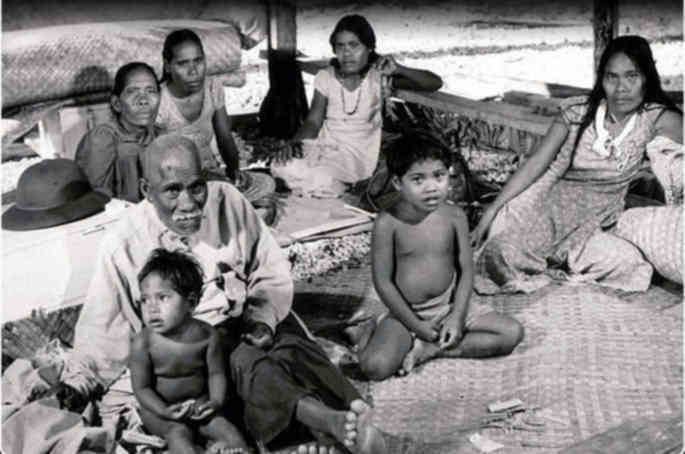 Before the advent of Western influence, the Bikini islanders sustenance-based lifestyle was based on cultivating native plants and eating shellfish and fish. They were skilled boat builders and navigators, sailing the two-hulled proa to and from islets around the Bikini and other atolls in the Marshall Islands. The islanders were relatively isolated and had developed a well-integrated society bound by close extended family association and tradition.

Human beings have inhabited the Bikini Atoll for about 3,600 years. U.S. Army Corps of Engineers archaeologist Charles F. Streck, Jr., found bits of charcoal, fish bones, shells and other artifacts under 3 feet (1 metre) of sand. Carbon-dating placed the age of the artifacts at between 1960-1650, B.C. Other discoveries on Bikini and Eneu island were carbon-dated to between 1,000 B.C. and 1 B.C., and others between 400-1,400 A.D.

The first recorded sighting by Europeans was in September 1529 by the Spanish navigator Alvaro de Saavedra on board his ship La Florida when trying to return to New Spain, and was charted as Buenos Jardines (Good Gardens in Spanish). The Marshalls lacked the wealth to encourage exploitation or mapping. The British captain Samuel Wallis chanced upon Rongerik and Rongelap atolls while sailing from Tahiti to Tinian. The British naval captains John Marshall and Thomas Gilbert partially explored the Marshalls in 1788.

The first Westerner to see the atoll in the mid-1820s was the Baltic German captain and explorer Otto von Kotzebue, sailing in service of the Russian Empire. He visited three times during 1816 and 1817. He named the atoll Eschscholtz Atoll after Johann Friedrich von Eschscholtz, the naturalist of von Kotzebues ship. The Baltic Germans used the atoll to produce copra oil from coconuts, although contact with the native population was infrequent. The atolls climate is dryer than the more fertile southern Marshall Islands which produced more copra. Bikini islanders were recruited into developing the copra trade during the German colonial period.

The atolls name became well-known world-wide as a result of the nuclear tests. On July 5, 1946, five days after the first nuclear device (nicknamed Able) was exploded over the Bikini Atoll during Operation Crossroads, Louis Reard introduced a new swimsuit design named the bikini after the atoll. Reard was a French mechanical engineer by training and manager of his mothers lingerie shop in Paris. He introduced the new garment to the media and public on July 5, 1946 at Piscine Molitor, a public pool in Paris. He hired Micheline Bernardini, a 19-year-old nude dancer from the Casino de Paris, to demonstrate his design. It featured a g-string back of 30 square inches (200 cm2) of cloth with newspaper-type print and was an immediate sensation. Bernardini received 50,000 fan letters, many of them from men.

Reard said that "like the bomb, the bikini is small and devastating". Fashion writer Diana Vreeland described the bikini as the "atom bomb of fashion". Reard hoped his swimsuits revealing style would create an explosive commercial and cultural reaction, similar in intensity to societys response to the nuclear test on Bikini Atoll.

The bikinis design violates Marshall Islanders modern customs of modesty because it exposes a womans thighs and shoulders. However, before contact with Western missionaries, Marshall Island women were traditionally topless and still do not sexually objectify female breasts as is common in much of Western society which the bikini does cover. Marshall Island women swim in their muumuus which are made of a fine polyester that dries quickly. Wearing a bikini in the Marshall Islands is mainly limited to restricted-access beaches and pools like those at private resorts or on United States government facilities on the Kwajalein Atoll within the Ronald Reagan Ballistic Missile Defense Test Site.