Andrew Cartmel (born 1958) is a British author and journalist, and former script editor of Doctor Who. He has also worked as a script editor on other television series, as a magazine editor, as a comics writer, as a film studies lecturer, and as a novelist. 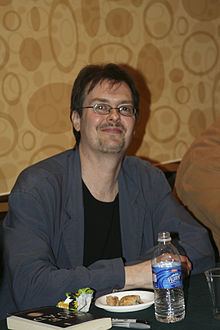 Cartmel took a post-graduate course in Computer Studies and worked on computer-aided design for Shape Data Ltd (now UGS Corp) in Cambridge, England during the mid-1980s. He then turned more to writing and managed to gain an agent on the strength of two unproduced scripts, also attending workshops run by the BBC Television Drama Script Unit.

In late 1986, when he was in his late twenties, Cartmel was hired as the script editor for the twenty-fourth season of the science-fiction programme Doctor Who, having been recommended to the producer John Nathan-Turner by the producer's agent, who had seen some unproduced scripts Cartmel had written. Cartmel worked on the programme for the next three years, overseeing the final three seasons of its original run on BBC One. He brought in several young, new writers and despite declining ratings, tried to take the series in a new creative direction.

The most significant legacy of this new direction might have been the so-called "Cartmel Masterplan", a back story developed with other writers that restored some of the mystery of the Doctor's background and could have explained exactly who he was. Although hints were dropped in the two full series Cartmel edited, the proposed revelations never materialised on screen as the programme was taken off the air in 1989.

When production of Doctor Who was placed on indefinite hold, Cartmel became script editor on the BBC's popular medical drama series Casualty for one season. During the 1990s he wrote comic strips for Judge Dredd Megazine and Doctor Who Magazine and three Doctor Who novels for Virgin Publishing in their New Adventures series. This series had used elements of the "masterplan" as part of their overall story arc for the Doctor, particularly in the last Seventh Doctor novel Lungbarrow, written by Marc Platt.

In 1999 his first original novel, The Wise, was published in Virgin's short-lived series of new science-fiction novels, Virgin Worlds. The same year, he became editor of the science-fiction magazine Starburst, although the appointment was a short one and he left the magazine in 2000.

Since then, he has written several pieces of Doctor Who fiction: in 2000, Winter for the Adept, an audio drama for Big Finish Productions'; in 2003, Foreign Devils, a novella for Telos Publishing; and, in 2005, Atom Bomb Blues, a novel for BBC Books. He developed a script for the third series of Torchwood entitled 'The Jinx', but it was dropped when the show's format was reworked. In 2010, Cartmel worked as script editor for Big Finish Productions' The Lost Stories line, overseeing the adaptation of story ideas created for Doctor Who's unmade 27th series into audio dramas (released in 2011). In addition to script editing the four "Season 27" stories, Cartmel wrote two scripts (Crime of the Century and Animal) and co-wrote a third, Earth Aid, with Ben Aaronovitch.

As well as Atom Bomb Blues, 2005 saw the publication of: Script Doctor â€“ The Inside Story of Doctor Who 1986â€“89, an account of his work on the Doctor Who television series; Through Time: An Unofficial and Unauthorised History of Doctor Who; and two 2000 AD spin-off novels, Judge Dredd: Swine Fever and Strontium Dog: Day of the Dogs'.

Cartmel has also written a novel set in the world of Patrick McGoohan's The Prisoner television series for Powys Media. The novel, released on 15 February 2008, is entitled Miss Freedom.

Common themes and techniques in Cartmel's novels include: animal rights; the use of animal perspectives; and extended metaphors of animal behaviour. These elements appear in the three Virgin New Adventures novels, the original novel The Wise, the Judge Dredd novel Swine Fever and the audio play Animal.

In 2001 Cartmel briefly returned to television as the script editor on the second season of Channel 5's fantasy / adventure series Dark Knight, writing what proved to be final episode of the series.

His first stage play, End of the Night, a thriller with gothic overtones, was produced by Long Shadow Productions in the summer of 2003.

In 2007 Cartmel was a finalist in the Nicotinell 'Lose the Smoke Keep the Fire' Stand Up Comedy Auditions.