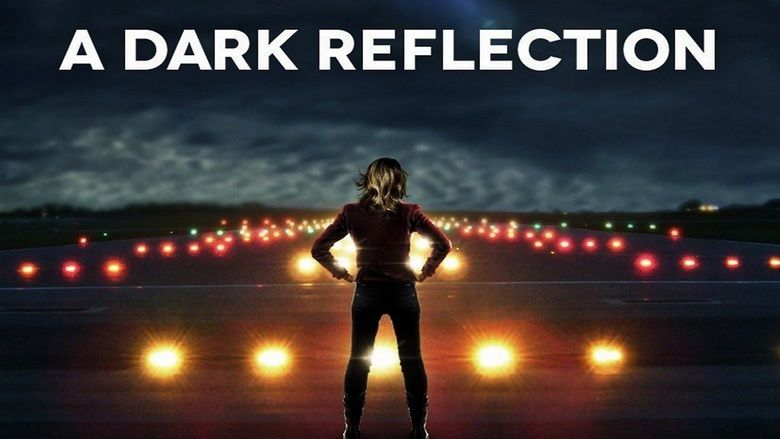 A Dark Reflection is a 2015 British independent investigative thriller film directed and produced by former British Airways airline captain Tristan Loraine. Billed as Erin Brockovich meets All the Presidents Men, the fact-based film is based on the directors own experience as a commercial pilot.

The film was made by volunteers with funding from unions, passenger groups and concerned aviation figures. It is based on actual events surrounding the issue of Aerotoxic Syndrome. Billed as a fact-based investigative thriller, the script tells the story of an air traffic controller who is suspended following a serious in-flight incident. When his journalist wife (Sutcliffe) starts to ask questions, she uncovers a disturbing succession of cover-ups dating back to 1954.

A journalist digs deep into the world of aviation and discovers some uncomfortable truths. And a conspiracy trail dating back to 1954. But why is no one saying anything?

After returning from the Middle East, British journalist Helen Eastman investigates a suspicious air traffic incident that involves a coverup.

Pre-production of the film started in January 2013 with filming commencing six months later in June 2013 in West Sussex, England.

The film received significant UK film industry support. All of the filming was done on location in England followed by a week of filming in Jordan, Loraine deciding not to use a soundstage. Further filming was carried out in Spring 2014 in Horsham.

Southdown Gliding Club in Storrington provided the venue for the complex glider scene in the film where the audience first meets JASP airline Captain Jeremy Adamson (Christopher Dickins) and his daughter Molly, played by 16-year-old Romina Hytten, from Storrington. Despite never having been in a glider before, Romina managed to smile her way through 22 consecutive loops and countless rolls with experienced pilot Guy Westgate.

A Dark Reflection does not follow the usual conventions for an independent film. Instead it embraces the new cooperative model for film-making, which taps into the collaborative means. Instead of raising the capital funds to make the film, a variety of businesses and individuals supplied goods and services, in addition to financial investment. Over one hundred co-operative businesses and individuals partnered with the film, making it the largest co-operative film to date.

In May 2014, producer Tristan Loraine and senior assistant producer Sarah Holloway took the film to Cannes, where A Dark Reflection was screened at the Marche du Film, Cannes 2014 Thursday 15 and 19 May. The film received positive public response, and A Dark Reflection screened to a packed auditorium.

Following its success at Cannes, Los Angeles based sales agent Artist View Entertainment began selling A Dark Reflection. In its first press release, Scott Jones, President of Artist View Entertainment stated, "We are very pleased to be working with Tristan Loraine and his powerful independent film. The production values and tightly crafted Direction are the key factors in pushing home a frightening message for those of us who travel by air on a daily basis." Other reviews were also positive about the film, highlighting the importance of the issues for public interest: Ted Jeory, Home Affairs Editor of the [Sunday Express], London, wrote, "Its got the lot. A film that has suspense, drama, action, intrepid journalism, and perhaps most importantlyâ€“a cause. A Dark Reflection shines a light on aviations dirty secret: the quality of the air we breathe on board planes. Its an important step in the decades long challenge to Big Oil and Big Aviation." Ross Coulthart of Sunday Night on Channel 7, Sydney, wrote, "A Dark Reflection is a gripping thriller based on the true-life scandal of a major toxic air health problem widespread on modern passenger jets. The most confronting thing about this extraordinary film is that its all true."

A Dark Reflection is due to be screened by Artist View Entertainment at the American Film Market (AFM) 5 & 6 November 2014.

In review, critics said the film has the right intention but fails because of vast deficencies in the storyline, screenplay, acting and its directing. The Daily Telegraph wrote, "...well-intentioned and informed, this tinny and tensionless dispatch really doesnâ€™t." In their review, The Guardian called it a "clunky drama". The Hollywood News wrote, "Itâ€™s a fascinating story and one that could easily be improved on by the right writer, director, and cast."

Following his own journey from British Airways, to film producer and director, it has always been Tristan Loraines ambition to raise awareness of the issues involving toxic air. After being forced to retire due to ill health, and losing friends, both pilots and crew who died from the poisonous fumes on board the aircraft they flew, Tristan has sought to bring aerotoxic syndrome to the attention of the public. Toxic Cabin Air has been of interest to the media for some years, but the public have been unaware of the importance it could make on their own health. In May 2014 The Daily Telegraph shared a video of a passenger who also suffered health issues after taking an American flight. The cause of the toxic air comes from the plane build, which brings bleed air into the aircraft cabin and cockpit via the engines; this has the potential for a bleed air leak. A Dark Reflection follows several Documentary Films also produced by Fact Not Fiction Films seeking to bring this issue to the fore. The films tagline, "What happened on Flight 313?" links to a real event.

The producers of A Dark Reflection are keen to promote the bleed free aircraft, such as the Boeing 787 Dreamliner, which is the first of its kind. Yet despite it being released in 2007, with The Telegraph calling it, "A Breath of Fresh Air", in 2009, there have been no moves since by the Airline Industry to remodel any other planes.

A Dark Reflection has been likened to the events of the missing Malaysian Airlines Flight MH370. However, the airline flight MH370 disappeared on 8 March 2014, which was after the filming of A Dark Reflection, which took place during the summer of 2013. Although there is no deliberate link to the film and disappearance of MH370, it has not been said that there couldnt be some significant similarity.