Reno is a city in the US state of Nevada near Lake Tahoe. Known as "The Biggest Little City in the World", Reno is famous for its casinos and as the birthplace of Caesars Entertainment Corporation. It is the county seat of Washoe County, located in the northwestern part of the state. The city sits in a high desert at the foot of the Sierra Nevada and its downtown area (along with Sparks) occupies a valley informally known as the Truckee Meadows.

Reno is the most populous Nevada city outside of the Las Vegas metropolitan area, with an estimated population of 233,294 in 2013, and is the third most populous city in the state after Las Vegas and Henderson.

Reno nevada a great place to be

Reno is part of the Reno–Sparks metropolitan area, which consists of all of both Washoe and Storey counties, and has a 2013 estimated population of 437,673, making it the second largest metropolitan area in Nevada.

things to do in reno nevada free

Archaeological finds place the eastern border for the prehistoric Martis people in the Reno area.

As early as the 1850s a few pioneers settled in the Truckee Meadows, a relatively fertile valley through which the Truckee River made its way from Lake Tahoe to Pyramid Lake. In addition to subsistence farming, these early residents could pick up business from travelers along the California Trail, which followed the Truckee westward, before branching off towards Donner Lake, where the formidable obstacle of the Sierra Nevada began.

Gold was discovered in the vicinity of Virginia City in 1850, and a modest mining community developed, but the discovery of silver in 1859 at the Comstock Lode led to a mining rush.

To provide the necessary connection between Virginia City and the California Trail, Charles W. Fuller built a log toll bridge across the Truckee River in 1859. A small community that would service travelers soon grew up near the bridge. After two years, Fuller sold the bridge to Myron C. Lake, who continued to develop the community with the addition of a grist mill, kiln, and livery stable to the hotel and eating house. He renamed it "Lakes Crossing". In 1864, Washoe County was consolidated with Roop County, and Lakes Crossing became the largest town in the county. Lake had earned himself the title "founder of Reno".

By January 1863, the Central Pacific Railroad (CPRR) had begun laying tracks east from Sacramento, California, eventually connecting with the Union Pacific Railroad at Promontory, Utah, to form the First Transcontinental Railroad. Lake deeded land to the CPRR in exchange for its promise to build a depot at Lakes Crossing. Once the railroad station was established, the town of Reno officially came into being on May 9, 1868. CPRR construction superintendent Charles Crocker named the community after Major General Jesse Lee Reno, a Union officer killed in the American Civil War at the Battle of South Mountain.

In 1871, Reno became the county seat of the newly expanded Washoe County, replacing the previous county seat, located in Washoe City. However, political power in Nevada remained with the mining communities, first Virginia City and later Tonopah and Goldfield.

The extension of the Virginia and Truckee Railroad to Reno in 1872 provided a boost to the new citys economy. In the following decades, Reno continued to grow and prosper as a business and agricultural center and became the principal settlement on the transcontinental railroad between Sacramento and Salt Lake City.

As the mining boom waned early in the 20th century, Nevadas centers of political and business activity shifted to the non-mining communities, especially Reno and Las Vegas, and today the former mining metropolises stand as little more than ghost towns. Despite this, Nevada is still the third-largest gold producer in the world, after South Africa and Australia; the state yielded 6.9 percent of the worlds supply in 2005 world gold production.

The "Reno Arch" was erected on Virginia Street in 1926 to promote the upcoming Transcontinental Highways Exposition of 1927. The arch included the words "Nevadas Transcontinental Highways Exposition" and the dates of the exposition. After the exposition, the Reno City Council decided to keep the arch as a permanent downtown gateway, and Mayor E.E. Roberts asked the citizens of Reno to suggest a slogan for the arch. No acceptable slogan was received until a $100 prize was offered, and G.A. Burns of Sacramento was declared the winner on March 14, 1929, with "Reno, The Biggest Little City in the World".

Reno took a leap when the state of Nevada legalized open-gambling in 1931, along with the passage of even more liberal divorce laws than places like Hot Springs, Arkansas, offered. No other state offered what Nevada did in the 1930s, and casinos like the Bank Club and Palace were popular.

Within a few years, the Bank Club, owned by George Wingfield, Bill Graham, and Jim McKay, was the states largest employer and the largest casino in the world. Wingfield owned most of the buildings in town that housed gaming and took a percentage of the profits, along with his rent.

Ernie Pyle once wrote in one of his columns, "All the people you saw on the streets in Reno were obviously there to get divorces." In Ayn Rands novel The Fountainhead, published in 1943, the New York-based female protagonist tells a friend, "I am going to Reno," which is taken as a different way of saying "I am going to divorce my husband." Among others, the Belgian-French writer Georges Simenon, at the time living in the U.S., came to Reno in 1950 in order to divorce his first wife.

The divorce business eventually died as the other states fell in line by passing their own laws easing the requirements for divorce, but gambling continued as a major Reno industry. While gaming pioneers like "Pappy" and Harold Smith of Harolds Club and Bill Harrah of the soon-to-dominate Harrahs casino set up shop in the 1930s, the war years of the 1940s cemented Reno as the place to play for two decades. Beginning in the 1950s, the need for economic diversification beyond gaming fueled a movement for more lenient business taxation.

A disaster occurred on the afternoon of February 5, 1957, when an explosion ripped through the heart of downtown. At 1:03 pm, two explosions, caused by natural gas leaking into the maze of pipes and ditches under the city, and an ensuing fire destroyed five buildings in the vicinity of Sierra and First streets along the Truckee River. Forty-nine people were injured in the disaster, and two were killed. The first explosion hit under the block of shops on the west side of Sierra Street (now the site of the Century Riverside), the second, across Sierra Street, now the site of the Palladio.

In the 1980s, Indian gaming rules were relaxed, and starting in 2000 Californian Native casinos began to chip away at Renos casino industry. Major new construction projects have been completed in the Reno and Sparks areas. A few new luxury communities were recently built in Truckee, California, approximately 28 miles (45 km) west of Reno on Interstate 80. Reno also is an outdoor recreation destination, due to its close proximity to the Sierra Nevada, Lake Tahoe, and numerous ski resorts in the region.

In more recent years, the city has gained some notoriety as the subject of the comedy series Reno 911! (which is not, however, filmed in the city).

On May 9, 2014, the Reno Historical App was released in conjunction with the Citys celebration of its 111th birthday as an incorporated city. The free app puts Renos history at users fingertips, allowing them to explore the people, places and moments that have shaped both the city’s and the University’s history. 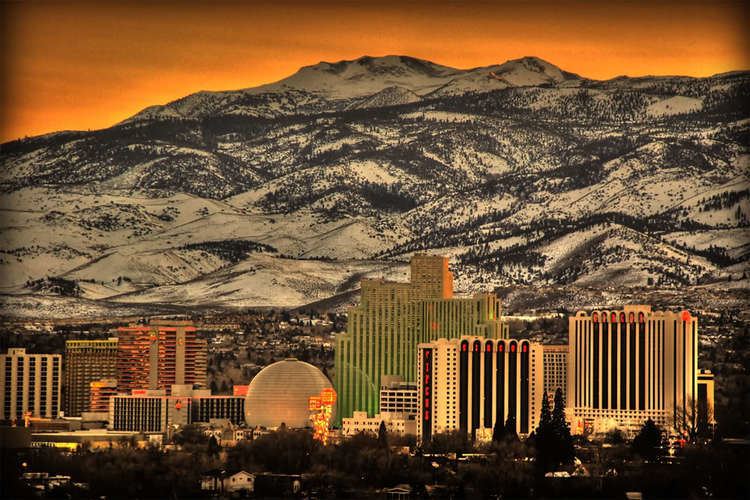 Wetlands are an important part of the Reno/Tahoe area. They act as a natural filter for the solids that come out of the water treatment plant. Plant roots absorb nutrients from the water and naturally filter it. Wetlands are home for over 75% of the species in the Great Basin. However, the areas wetlands are at risk of being destroyed due to development around the city. While developers build on top of the wetlands they fill them with dirt destroying the habitat they create for the plants and animals. Washoe County has devised a plan that will help protect these ecosystems: mitigation. In the future, when developers try to build over a wetland, they will be responsible for creating another wetland near Washoe Lake.

The Truckee River serves as Renos primary source of drinking water. It supplies Reno with 80 million U.S. gallons (300 Ml) of water a day during the summer, and 40 million U.S. gallons (150 Ml) of water per day in the winter. Before the water goes to the homes around the Reno area, it must go to one of two water treatment plants, Chalk Bluff or Glendale Water Treatment Plant. As an attempt to save water, golf courses in Reno, like Arrow Creek Golf Course, have been using treated effluent water instead of treated water from one of Renos water plants.

The Reno-Sparks wastewater treatment plant discharges tertiary treated effluent to the Truckee River. In the 1990s this capacity was increased from 20 to 30 million U.S. gallons (70 to 110 million liters) per day. While treated, the effluent contains suspended solids, nitrogen, and phosphorus, aggravating water quality concerns of the river and its receiving waters of Pyramid Lake. Local agencies working with the Environmental Protection Agency have developed a number of watershed management strategies to accommodate this expanded effluent discharge; to accomplish this successful outcome, the DSSAM Model was developed and calibrated for the Truckee River in order to analyze the most cost-effective available management strategy set. The resulting management strategies included a package of measures such as land use controls in the Lake Tahoe basin, urban runoff controls in Reno and Sparks, and best management practices for wastewater discharge.

The Reno area is frequently subject to wildfires, causing property damage and sometimes loss of life. In August 1960, the Donner Ridge fire resulted in a loss of electricity to the city for four days. In November 2011, arcing from powerlines caused a fire in Caughlin in southwest Reno that destroyed 26 homes and killed one older man, and only two months later in January 2012 another fire in Washoe Drive sparked by fireplace ashes destroyed 29 homes and killed one older woman. Around 10,000 residents were evacuated, and a state of emergency was declared. The fires came at the end of Renos longest recorded dry spell.

Before the late 1950s, Reno was the gambling capital of the United States, but in the last twenty years Las Vegas rapid growth, American Airlines 2000 buyout of Reno Air, and the growth of Native American gaming in California have reduced its business. Older casinos were torn down (Mapes Hotel, Fitzgeralds Nevada Club, Primadonna, Horseshoe Club, Harolds Club, Palace Club), or smaller casinos like the Comstock, Sundowner, Golden Phoenix, Kings Inn, Money Tree, Virginian, and Riverboat were either closed or were converted into condos. 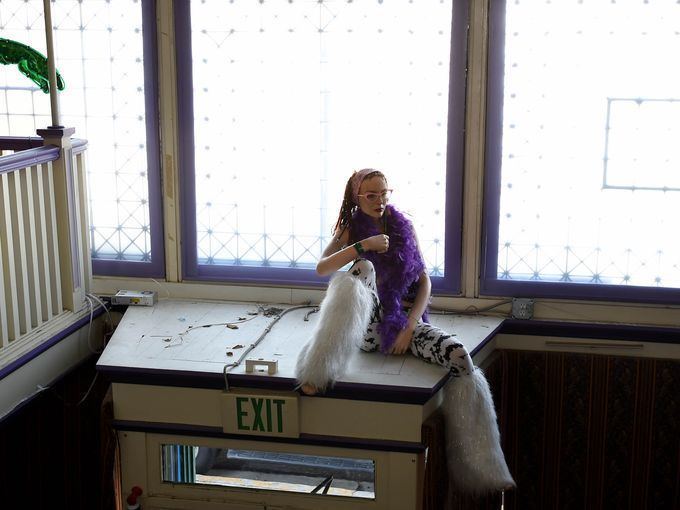 The Nevada Museum of Art, located at 160 West Liberty Street in Reno, Nevada, is the only American Alliance of Museums (AAM) accredited art museum in the state of Nevada.