La Paz ( , Peace) is the capital city of the Mexican state of Baja California Sur and an important regional commercial center. The city had a 2010 census population of 215,178 people, but its metropolitan population is somewhat larger because of surrounding towns such as el Centenario, el Zacatal and San Pedro. Its surrounding municipality, which is the fourth-largest municipality in Mexico in geographical size, reported a population of 251,871 persons living on a land area of 20,275 km2 (7,828 sq mi). 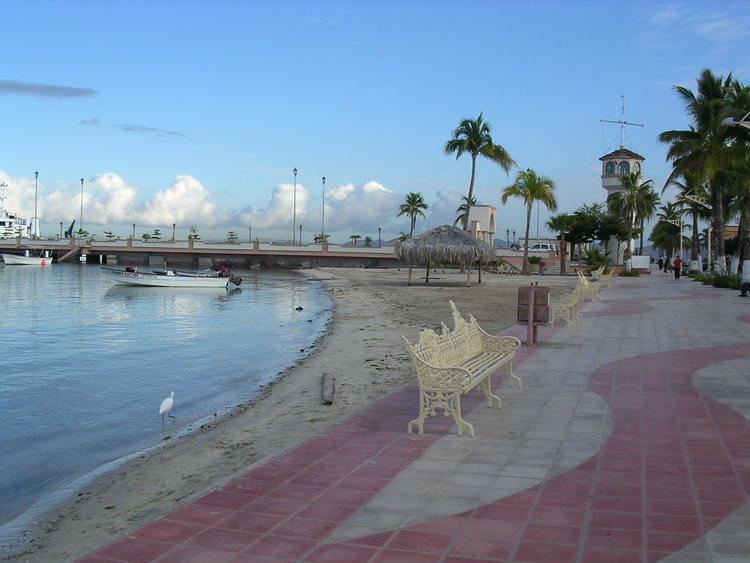 La Paz was first inhabited by Neolithic hunter-gatherers at least 10,000 years ago who left traces of their existence in the form of rock paintings near the city and throughout the Baja California peninsula. On May 3, 1535, Hernan Cortes arrived in the bay by La Paz and named it Santa Cruz; he attempted to start a colony but abandoned his efforts after several years due to logistical problems. In 1596 Sebastian Vizcaino arrived, giving the area its modern name, La Paz.

From January 10, 1854 to May 8, 1854 it served as the capital of William Walkers Republic of Sonora. The project collapsed due to lack of US support and pressure from the Mexican government to retake the region.

La Paz is featured in the John Steinbeck novel The Pearl (1947) and mentioned extensively in his travelogue The Log from the Sea of Cortez (1951). The city is also the setting of the childrens novel The Black Pearl (1967) by Scott ODell, chosen as a Newbery Honor Book in 1968.

The population of La Paz has grown greatly since the 2000 census; in 2010 it was 215,178. This growth is largely because the city enjoys one of the highest standards of living and quality of life in Mexico, with average wages in the range of 27 USD per day, when compared to the country overall where minimum wages stand at closer to $4.25 USD per day. For this reason many workers migrate to La Paz and other areas in Baja California Sur, to enjoy a better life without leaving the country while still able to remit portions of their incomes to their families in their home states.