Arnoldus "Andy" Mauritius Blignaut (born 1 August 1978) is a Zimbabwean cricketer. He is a right-arm fast-medium bowler, but he is also known for his vicious form with the bat in ODIs, where his frequent scoring of runs at a fast rate is a valuable asset, though seeing him sustaining this form and keeping his wicket intact through many overs is a rare event. Due to this, he more often plays ODIs, where many runs in a short time are desired, than he plays Tests.

On his debut, he took five wickets in the first innings against Bangladesh in Bulawayo in 2001.

Blignaut took a hat-trick against Bangladesh in a test match Harare on 22 February 2004. He was the first, and to date only, bowler to take a test hat-trick for Zimbabwe.

In the Australian season 2004/2005, Blignaut was contracted to play for Tasmania in the Australian Domestic Competition. Injury and poor form prevented him from playing all but a couple of games for the state. He even struggled to make an impact at club level. Eventually he returned to Zimbabwe to re-join the Test side. The second year of his contract with Tasmania was cancelled. 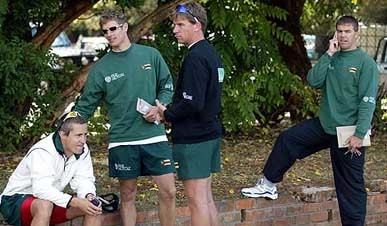 After playing the series against New Zealand and India in 2005, he withdrew himself from Zimbabwe selection because of not being paid by ZC for the both series he played after his return. It seems that ZC was either unable or unwilling to pay him his dues. Although he was a very possible candidate for the captaincy for the Kenya series, he made it crystal clear that he is not going to return if he is not paid.

He signed a contract with South African domestic side Highveld Lions for 2006 season. After 2006, he seemed to completely disappear from cricket scene. It is believed that he returned to Zimbabwe then and started to play some social cricket there. Nowadays hes based in both SA and Zim working on the family business. At the age of 31, Zimbabwean chief selector Alistair Campbell has talked with him about a possible return and it is said that he is interested in it.

He hails from an Afrikaner farming family of French Huguenot extraction.